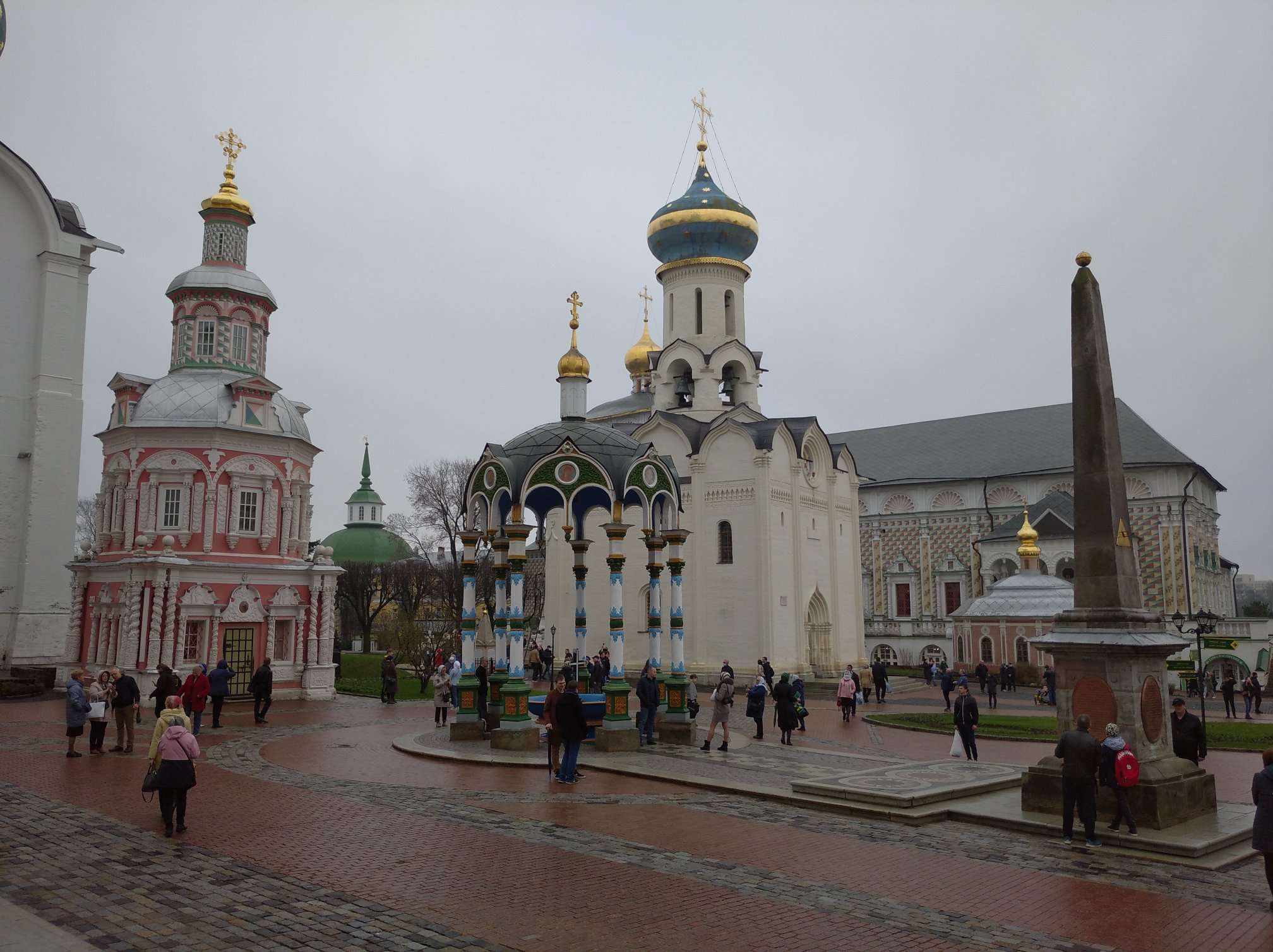 Itinerary
1 day
Welcome to Moscow! Your guide will meet you at the airport or at the railway station and you will go on a sightseeing tour of Moscow.
You will pass along the famous embankments and streets of the historical city: Boulevard and Garden Ring, admire the most beautiful panoramic views of the Kremlin from Sofiyskaya Embankment, see the Bolshoi Theater and Manege, Lubyanka, Slavyanskaya and Theater Squares, the legendary "Stalin's High-Rises", which are often called "Seven Sisters", the most beautiful fountains and masterpieces of architecture of the Exhibition of Achievements of National Economy, Ostankino Tower, Kutuzovsky Prospekt, Triumphal Arch, Victory Park on Poklonnaya Hill, Victory Museum, golden domes of the Cathedral of Christ the Savior, Patriarchal Bridge, Swan Pond near the walls of the Novodevichy Convent, the observation deck on Sparrow Hills, the building of Moscow State University, Luzhniki Stadium, modern Moscow-City skyscrapers and much, much more.
Then you will have a guided tour of the Moscow metro. This is a unique opportunity to hear a story about the Moscow metro, see its magnificent stations "Ploschad Revolyutsii", "Komsomolskaya", "Novoslobodskaya", "Belorusskaya" and enjoy the unique architecture and mosaics.
After checking in at the hotel (check-in after 14.00) you can relax, as well as have lunch or dinner on your own in one of the nearby restaurants - your guide will be happy to advise you where to go.

2 day
Breakfast at the hotel restaurant.
After breakfast you will go on an excursion to the Moscow Kremlin - the largest medieval fortress, on the territory of which you will see unique monuments of architecture and art of the 15th - 20th centuries: temples, churches and chambers, magnificent palaces and ceremonial administrative buildings. You will walk along the Kremlin squares and streets, see the "Tsar Bell" and "Tsar Cannon", Cathedral Square and the Kremlin Palace, as well as visit the Assumption, Archangel or Annunciation Cathedral.
Then you will walk along the famous cobblestones of Red Square and walk along the Alexander Garden. You will see the multicolored domes of St. Basil's Cathedral, the monument of medieval Russian architecture "Lobnoye Mesto", the Temple of the Kazan Icon of the Mother of God, the State Historical Museum, the Lenin's Mausoleum, the GUM building, enjoy the splendor of the panorama of the ancient Kremlin from the Sofiyskaya embankment of the Moscow River.
You will see a new landmark of the city - Zaryadye Park, walk along the alleys of the Siberian coniferous forest in the very center of Moscow, visit the famous Soaring Bridge - a magnificent observation deck hanging right over the Moscow River!

3 day
Breakfast at the hotel restaurant or lunch box.
After checking out the hotel rooms, you will go on an exciting trip along the Golden Ring. For two days you will immerse yourself in the atmosphere of the Russian Middle Ages by visiting the three most famous cities of the "Golden Ring" - Sergiev Posad, Vladimir and Suzdal.
First, our path lies in the city of Sergiev Posad. You will visit the territory of the Holy Trinity Sergius Lavra, you will see the largest Orthodox male monastery in Russia, founded by the Monk Sergius of Radonezh more than five hundred years ago and still functioning today. The Lavra ensemble includes more than fifty architectural structures of different styles. This place is one of the most visited by pilgrims, people come here in groups from all over Russia.
Then we will offer you free time for lunch in a cozy restaurant in Sergiev Pasada and head to old Vladimir - the capital of the "Golden Ring" and the former capital of Russia until the 15th century.
Upon arrival in Vladimir you will go on a sightseeing tour of the city. During the sightseeing tour, you will see the interesting sights of the city - the Dmitrievsky Cathedral, decorated with a unique white stone carving, an outstanding monument of ancient Russian architecture - the Golden Gate, the Trinity Church, a defensive earthen rampart, the Church of St. George the Victorious, a monument to Prince Vladimir - the Baptist of Russia, Cathedral Square - the heart of the city, a monument to Vladimir Monomakh, hear urban legends, and also visit the main temple of North-Eastern Russia - the Assumption Cathedral, where you can see the murals of St. Andrei Rublev.
Next we will go to the old Suzdal.
After accommodation in one of the hotels in the city, you will have a rest and the opportunity to dine on your own in a cafe or in restaurants of the city.

4 day
Breakfast at the hotel restaurant.
We will start this day with a sightseeing tour of Suzdal, a city-museum that has a long history. We will walk along its historic streets, see the ancient churches and cozy wooden buildings of the city. We will visit the Trade Square, which is still the center of Suzdal life, see the Assumption Church in the Naryshkin Baroque style, visit the territory of the Kremlin and see the majestic Nativity Cathedral under blue baths with gold stars, walk along the Kremlin ramparts of the 12th century. The most beautiful monasteries are waiting for you: the Robe with a high bell tower and the Pokrovsky surrounded by white stone walls and, of course, we will definitely visit the main attraction of the city - the Transfiguration Cathedral, which is located on the territory of the Spaso-Evfimievsky Monastery. Its visit will be interesting not only for those who like to visit religious places, but also for connoisseurs of ancient architecture. This cathedral is the clearest example of the white-stone architecture of Suzdal, and inside it, colorful frescoes of the 17th century are still preserved.
After the excursion, you can dine at one of the cozy restaurants in Suzdal.
Then you will visit the Museum of Wooden Architecture, which is an open-air complex, which contains unique buildings of the 17th - 19th centuries. Arriving here (the museum is located on the outskirts of the city), you can look into the hut of a simple farm laborer or a well-to-do peasant, become a guest of a merchant's house, or visit churches that were built without a single nail.
Then we will go to old Vladimir - the capital of the "Golden Ring" and the former capital of Russia until the 15th century.
Upon arrival in Vladimir you will go on a sightseeing tour of the city. During the sightseeing tour, you will see the interesting sights of the city - the Dmitrievsky Cathedral, decorated with a unique white stone carving, an outstanding monument of ancient Russian architecture - the Golden Gate, the Trinity Church, a defensive earthen rampart, the Church of St. George the Victorious, a monument to Prince Vladimir - the Baptist of Russia, Cathedral Square - the heart of the city, a monument to Vladimir Monomakh, hear urban legends, and also visit the main temple of North-Eastern Russia - the Assumption Cathedral, where you can see the murals of St. Andrei Rublev.
After returning to the hotel you will have free time to recuperate or go for a walk along the old streets of the city.

5 day
Breakfast at the hotel restaurant or lunch box.
After check-out you will be transferred to Saint-Petersburg by high-speed train. You will have time to relax and gain strength before visiting the Northern capital of Russia. Your train journey will take about 6 hours.
Arrival in Saint-Petersburg, meeting with the guide at the railway station.
The guide will offer you free time for your own lunch.
Then you will go on a sightseeing tour of Saint-Petersburg, which will acquaint you with the long history of the Northern capital.
You will admire the panorama of the beautiful Neva, see magnificent ensembles of the central squares, drive along the central avenues and streets of the city. Everything that attracts guests from all over the world will appear to your attention: Nevsky Prospect, Kazan Cathedral, a monument to Catherine II, the Admiralty building, Senate Square, the "Bronze Horseman" monument, St. Isaac's Cathedral, the monument to Nicholas I, the Winter Palace, the Palace Bridge, Spit of Vasilyevsky Island, Kunstkamera, Stock Exchange building, Rostral Columns, University Embankment, Peter and Paul Fortress, Troitsky Bridge, Savior on Spilled Blood Cathedral, Summer Garden, Mikhailovsky Palace, Marble Palace, Mikhailovsky Castle, Field of Mars and other attractions.
After the end of the sightseeing tour, your guide will take you to the hotel, where you can stay in comfortable rooms and relax.

6 day
Breakfast at the hotel restaurant.
After breakfast you will visit the Hermitage - one of the largest museums in the world. The Hermitage was founded as a personal collection of Empress Catherine II, who, wishing to establish herself as an "enlightened empress", began collecting works of art. Painting experts, European scholars, collected and bought collections of paintings for the Russian empress, and soon Russia accumulated enormous wealth - a collection of works of Western European old masters. For a long time, the museum remained closed to the general public, and became public only in the middle of the 19th century. Now his collection numbers over 3.5 million items. Among them are paintings by Leonardo da Vinci, Rembrandt, Rubens, Van Dyck, Velazquez, Goya, Watteau, Poussin, Gainsborough, antique sculpture, Egyptian antiquities and much, much more.
Your guide will offer you free time for lunch in a cafe or in a city restaurant.
You will continue this day with a country excursion to the brilliant Peterhof - the "capital of fountains" and the favorite residence of Peter I. In splendor and richness of decoration, Peterhof surpassed its prototype - French Versailles and became the most beautiful palace and park ensemble in Europe. You will get acquainted with the history of the creation of this man-made miracle, admire the most famous fountains and cascades, learn the engineering secrets of its construction, walk along the shady alleys of the Lower Park, and also admire the panorama of the Gulf of Finland.

7 day
After breakfast at the hotel restaurant and checking out the rooms, you will have time to stroll through the souvenir shops and shops of Nevsky prospect and buy gifts for friends and relatives.
Transfer to the airport or the railway station.

Departure Point
the airport or the railway station

Return Details
the airport or the railway station