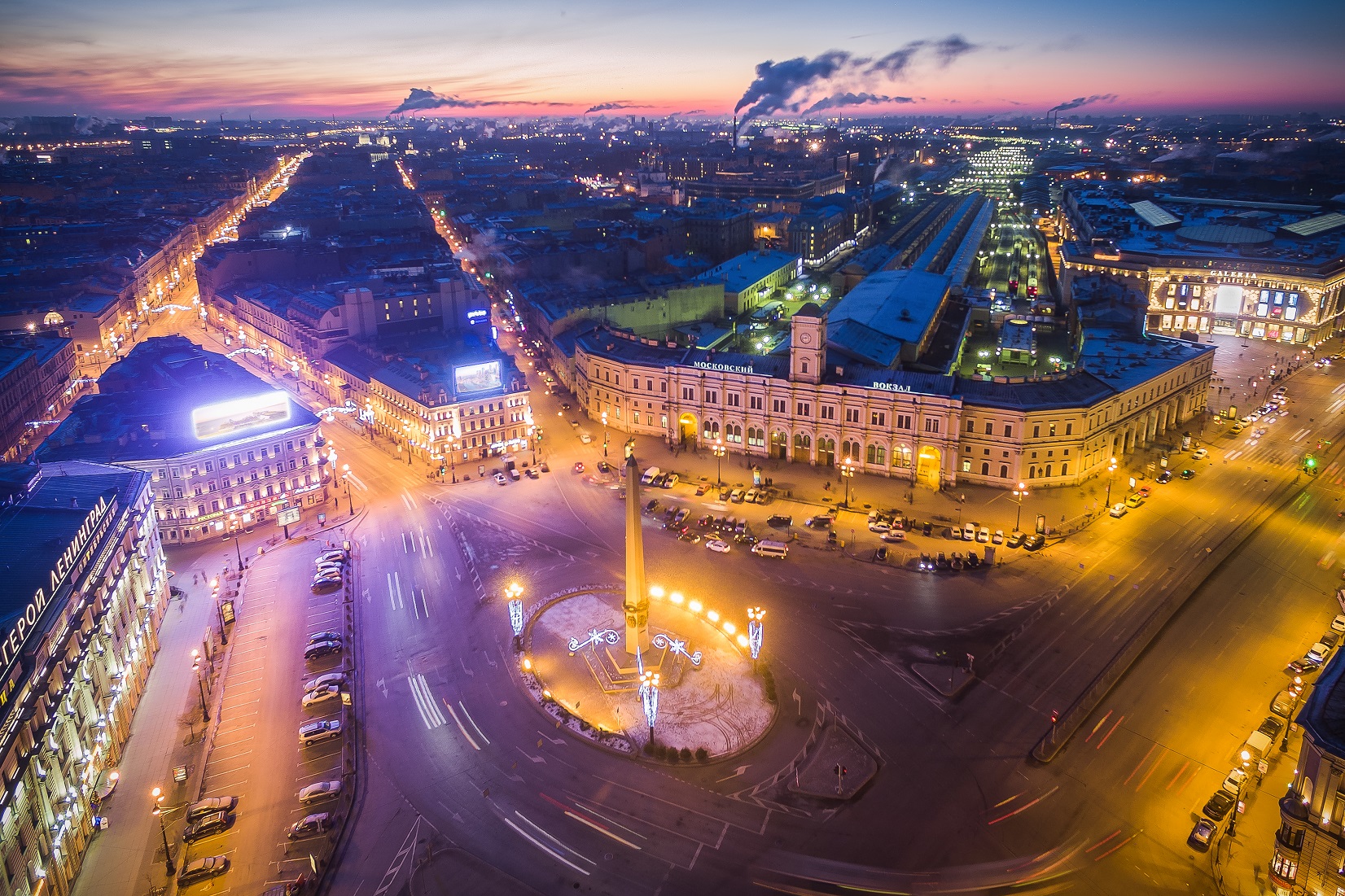 
1 day
Welcome to Moscow! Your guide will meet you in the airport or at the railway station and you will go for  sightseeing excursion.
You will pass along the famous embankments and streets of the historical city: Boulevard and Garden Ring, admire the most beautiful panoramic views of the Kremlin from Sofiyskaya Embankment, see the Bolshoi Theater and Manege, Lubyanka, Slavyanskaya and Theater Squares, the legendary "Stalin's high-rises", which are often called "Seven Sisters", the most beautiful fountains and masterpieces of architecture of the Exhibition of Achievements of National Economy, Ostankino tower, Kutuzovsky prospekt, Triumphal Arch, Victory Park on Poklonnaya Hill, Victory museum, golden domes of the Cathedral of Christ the Savior, Patriarchal bridge, Swan pond near the walls of the Novodevichy Convent, observation deck on Sparrow Hills, the building of Moscow State University, Luzhniki stadium, modern Moscow-City skyscrapers and much, much more.
After checking at the hotel (check in - after 14.00) you can relax, as well as have lunch or dinner on your own in one of the nearby restaurants - your guide will be happy to advise you where to go.

2 day
Breakfast at the hotel restaurant.
After breakfast your guide will meet you in the hall of hotel and you will go for excursion to the  Moscow Kremlin , which located on its territory unique monuments of architecture and art of the 15th - 20th centuries: temples, churches and chambers, magnificent palaces and front office buildings. You walk along Kremlin squares and streets, see the "Tsar Bell" and "Tsar Cannon", visit Sobornaya square and one of the cathedrals: Uspensky, Arkhangelsky or Blagoveshchensky.
Then you will walk along the famous cobblestones of  Red Square  and  Alexander Garden . You will see the multicolored domes of St. Basil's Cathedral, the monument of medieval Russian architecture "Lobnoe Mesto", the Temple of the Kazan Icon of the Mother of God, the State Historical Museum, the Lenin's Mausoleum, the GUM building, enjoy the splendor of the panorama of the ancient Kremlin from the Sofiyskaya embankment of the Moscow River.
You will see a new landmark of the city -  Zaryadye Park , stroll along the alleys of the Siberian coniferous forest in the very center of Moscow, visit the famous  Soaring Bridge  - a magnificent observation deck hanging right over the Moscow River!

3 day
Breakfast at the hotel restaurant, check out till 12:00.
The guide will be waiting for you in the hotel lobby at 12.30 and you will go on an excursion to  Sergiev Posad . This is the only city in the Moscow region that is part of the ensemble of ancient Russian cities of the  Golden Ring.  The famous  Trinity-Sergius Lavra  of the 14th century is located here, on the territory of which there is the largest Orthodox monastery in Russia, founded by the Monk Sergius of Radonezh more than five hundred years ago and still operating to this day. The Lavra ensemble includes more than fifty architectural structures of different styles. This place is one of the most visited by pilgrims, people come here in groups from all over Russia.
Upon your return to the city, you will go on a tour of the  Moscow metro  and see a real underground masterpiece of architecture of different styles: modern, empire, gothic, where each station is unique. This is an underground museum, with architectural monuments underground palaces. And you can see its magnificent stations: "Revolution Square", "Novoslobodskaya", "Mayakovskaya", "Komsomolskaya", "Kievskaya", "Gorky Park" and enjoy the unique architecture and mosaics.
Returning to the city center, you will visit one of the most famous streets of Russia -  Arbat . You can plunge into the atmosphere of the past, find out where great literary figures liked to spend time, look at street musicians and artists, without whom it is impossible to imagine this famous street.  Arbat  is a symbol of old Moscow. During the tour, you will get acquainted with the history and architecture of the Arbat, its monuments and sights, learn about the Vakhtangov Theater and the monument to Princess Turandot, the A.S. Pushkin Museum and the construction of the Ministry of Foreign Affairs.
In the evening, we suggest you dine on your own in one of the Moscow cafes or restaurants, and then you will be transferred to the Leningradsky railway station and departed  for Saint-Petersburg by a comfortable night train . Overnight on the train in a 4-seater compartment.

4 day
You will arrive in Saint-Petersburg early in the morning. Your guide will meet you at the Moskovsky railway station and after a welcome, you will go to breakfast in one of the cozy cafes of the city.
After breakfast you will have a  sightseeing tour of the Northern Capital.
You will admire the panorama of the beautiful Neva, see magnificent ensembles of the central squares, drive along the central avenues and streets of the city. Everything that attracts guests from all over the world will appear to your attention: Nevsky Prospect, Kazan Cathedral, a monument to Catherine II, the Admiralty building, Senate Square, the Bronze Horseman monument, St. Isaac's Cathedral, the monument to Nicholas I, the Winter Palace, the Palace Bridge, Spit of Vasilyevsky Island, Kunstkamera, Stock Exchange building, Rostral Columns, University Embankment, Peter and Paul Fortress, Troitsky Bridge, Savior on Spilled Blood Cathedral, Summer Garden, Mikhailovsky Palace, Marble Palace, Mikhailovsky Castle, Field of Mars and other famous attractions.
Then your day will continue with an excursion to  the Peter and Paul Fortress.  You will go to the very "heart" of the city, the place from which the history of St. Petersburg began. You will walk through the territory of the fortress and hear the history of the construction of this structure, see the first triumphal gates and the only city gates overlooking the Neva, see ancient buildings, casemates and the most unusual monument to the founder of Saint-Petersburg. You will visit  the Cathedral of the Holy Apostles Peter and Paul  and see the burial place of the main representatives of the Romanov dynasty, from Peter I to Nicholas II and his family.
After accommodation at the hotel (check in - after 14.00) you can relax and also dine on your own in one of the nearby cozy cafes or restaurants.

5 day
Breakfast at the hotel restaurant.
After breakfast you will visit the  Hermitage  - one of the largest museums in the world. The Hermitage was founded as a personal collection of Empress Catherine II, who, wishing to establish herself as an "enlightened empress", began collecting works of art. Painting experts, European scholars, collected and bought collections of paintings for the Russian empress, and soon Russia accumulated enormous wealth - a collection of works of Western European old masters. For a long time, the museum remained closed to the general public, and became public only in the middle of the 19th century. Now his collection numbers over 3.5 million items. Among them are paintings by Leonardo da Vinci, Rembrandt, Rubens, Van Dyck, Velazquez, Goya, Watteau, Poussin, Gainsborough, antique sculpture, Egyptian antiquities and much, much more.

6 day
Breakfast at the hotel restaurant, check out.
After breakfast you will go on an excursion to  Tsarskoe Selo  and visit the magnificent  Catherine Palace . Like Peterhof, Tsarskoe Selo was the favorite ceremonial summer residence of Russian emperors. Laid down by the wife of Peter the Great, it reached its heyday during the reign of the next two sovereigns - Peter's daughter Elizabeth and the world-famous Empress Catherine II. The Catherine Palace is one of those places where the luxurious 18th century still lives. Lush decoration, an abundance of gold, carvings and paintings, an endless golden enfilade of state rooms, spatial scope - this palace was born for the organization of grandiose holidays designed to emphasize the power of the Russian monarchy in the eyes of foreign ambassadors. You can see the famous Amber Room, which disappeared without a trace during the Great Patriotic War and was recreated from oblivion by Saint-Petersburg restorers for the 300th anniversary of Saint-Petersburg.
Returning to the city center you will have time to stroll through the souvenir shops and shops of Nevsky prospect and buy gifts for friends and relatives.
Then your guide will accompany you to the airport or to the railway station.